How to Generate Mock Sales Data

Search for mock data or mockup data, and you’ll have plenty of options for items like customers or regions. Mockaroo is one popular choice among many for generating such data and will generate up to 1000 records for free. When you try try to find sales data that is worth using, that is another story altogether. The choices are much more limited. This article can show you how to generate meaningful mock sales data. 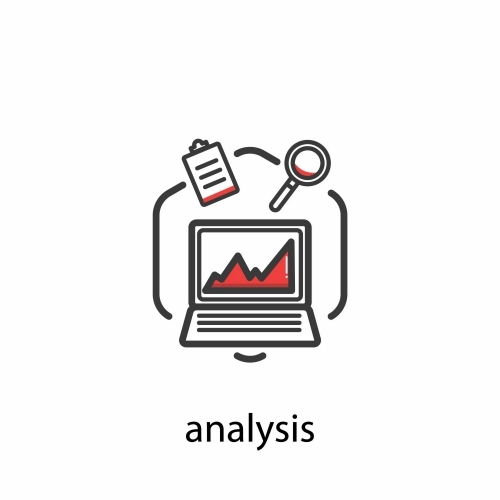 Generating mock sales data is challenging because there are many components to it. The data itself is quite simple and often includes the transaction date, the customer number, the products and quantities of those products. Perhaps it contains the store number to, but to keep it simple, we’ll use only the core components.

The three main tables of most sales schemas are the sales (sometimes called orders), customers, and products.

Other tables, like stores, regions, and returns, advertising and marketing, can also be integrated, but these are handled in a similar fashion to how products and customers work.

For this tutorial, I will concentrate on just the sales generation, as it’s the most involved procedure to generate records. For products and customers, you can easily find generators online or data that you can download.

Be careful on how you use any data that you find and check to make sure you have rights to use it. If you have a list of common first names and you create an Excel macro to combine them with common last names (Smith, Jones, etc.) then you should be fine. However, this article should not be misconstrued as offering any legal advice. Please seek the advice of a legal professional for this.

The proper format for sales data is a set of pointers to other tables. It is a set of keys and dates. For instance, the sales data I will show you how to generate in this tutorial will contain the following: 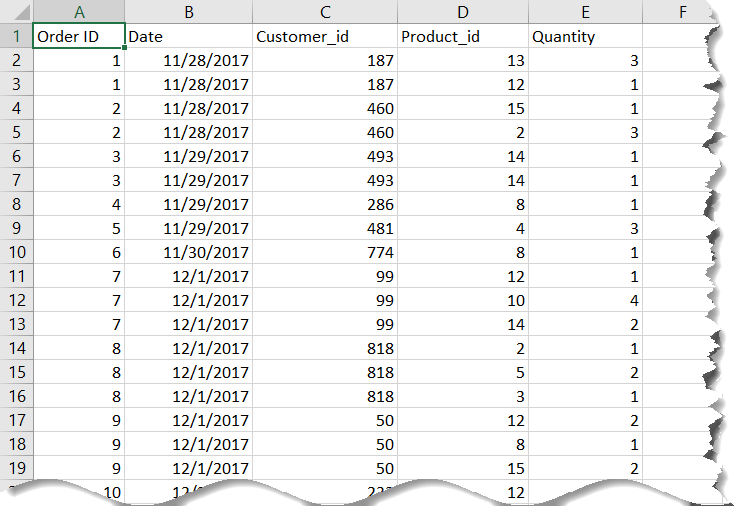 Note: due to the tool I was using for my analysis after generating data, the headers in the above sample file are different than what will be generated from the algorithm. Feel free to name them whatever names work for you.

With the exception of the date field, the other fields are numeric pointers. The first column (Order ID, which is orderNum ) is generated as a sequence. The other numeric fields are keyed to other tables that contain descriptions of those keys.

I tried as hard as I could to come up with procedures to generate the orders table completely from Excel and with no macros. I tried to use random number generation followed by IF statements. But I had to do a lot of manually data entry as a result that is proved to be not useful as an order generation table.

I started implementing VBA code (code that results from recording macros). But even that proved too difficult. Instead, I created the routines in R language, which was much easier due to its extensive tools available in the language.

Generating the code in R had its own set of challenges, but they were manageable. For instance, R does not support pass-by-reference variable access. But you can get around this problem by using lists. That is the solution I adopted (more on this later).

My first intuition was to determine the number of orders ahead of time and then try to fill in each of the columns based on a set of rules. In trying to recreate how sales would be generated in a real setting, the following had to be considered:

One feature that won’t be included in this tutorial is associating related products. For example, while a customer may not buy high-end bikes frequently, they may return to a bike store to purchase accessories. Also, it’s likely that salespeople will upsell related products. For instance, a new bike owner may not own a helmet. The salesperson will advise the newbie on the importance of having a helmet. The salesperson may also sell water bottles that fit easily on the new bike. These purchasing habits would alter the sales data significantly. It adds a level of complexity that I will tackle as an enhancement.

One caveat I should mention is that this tutorial will not cover R coding. The constructs used in the tutorial are standard and can be learned from several tutorials on the web. A good place to start is with Data Camp’s R tutorial. They let you try out the first chapter before you need to upgrade. The first chapter covers quite a bit of R coding and is a great overview. 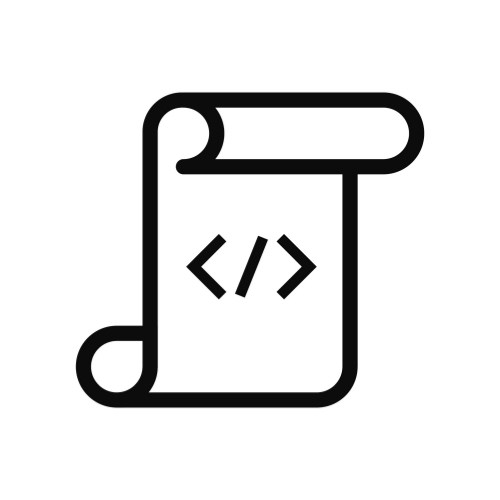 We’re going to create a routine called GenerateOrders that returns a data frame. When you save a data frame using the write.csv() command, it will automatically generate the appropriate columns for you into a Comma-Separated File (CSV). A CSV is one of the most popular formats to use. The file will contain the following fields:

As mentioned above, these column names are different than what appears in the image of the orders table spreadsheet.

I include the R constructs that I used to create this project. This way, you can find information online if you aren’t familiar with them. You can focus your efforts on these constructs, although it won’t hurt to learn as much as you can about the complete language. Here are the constructs used:

All these constructs are standard within the core R language. In fact, there aren’t any libraries included in the code that I provide. If you already have a basic knowledge of R, you should find this tutorial relatively easy to follow along. If you are new to R, you should consider taking a few tutorials on the language.

You are welcome to bypass learning the language and simply use the code I provide to create sales data for your use. However, if you want to make adjustments to suit your needs, you’ll have a difficult time knowing what to do without a basic knowledge of the R language.

Here is a description of the parameters:

startingDate - you can choose whatever date you like for the startingDate parameter. You’ll want to choose a date sometime in the past. With the data I generated for demonstration, I used 11/28/2017.

customerMax - is used to enter the largest Customer Key in your schema. Depending on your requirements, you may want to have this information predetermined. If you are going to use it in a BI reporting tool, each of the Customer IDs will need to be valid.

Note: the algorithm assumes that each number from 1 to the customerMax exists in the customer table. This may not be a valid assumption. For instance, if your customer table contains 1, 2, 3, 5, 6 as valid customer numbers, the number 4 is missing. This algorithm may include (randomly) the number 4. One workaround to this problem is to re-sequence a new field in Excel for customers and use that re-sequence as the key. This would also solve the problem if your customer key contains alphanumeric characters instead of sequential numbers.

As an enhancement, I plan on reading customer tables and extracting the sequence numbers directly. This would eliminate the need to enter a value for customerMax. The same is true for productMax (next).

productMax – this field is the highest number product id, assuming that product id’s are sequential and all numeric. See the above explanations for customerMax for possible enhancements and workarounds.

numDates – the algorithm will sequence a series of dates starting with the starting date. It will use this sequence of dates as the main iterator in the GenerateCustomer routine. Bear in mind that the total number of items generated is likely to be much greater than the number you enter for this parameter. For demonstration purposes, I chose 1000 dates to be initially generated. Due to the rules specified previously, the number of items that were generated from the algorthim was over 5,000.

oNum is short for order number. This counter will be needed to continually increase as orders are added to the data frame. As mentioned, R has no native ability to pass parameters by reference. That is why GenerateCustomers returns a list instead. The list contains the oNum and the data frame containing the records for each data. The oNum is retrieved and updated after the call so that the continuous sequence for order numbers is maintained. Without this, oNum would reset to 0 after each call to GenerateCustomers.

Next, we create a sequence of dates that will be used as the iterator of the loop. This I name dateArr. I chose to change the dates to strings as when I first created this, it was changing the values to the numeric equivalent of the dates. For some reason, it wasn’t correct, though. The day and month were right, but the year was for 1950. CSV files don’t understand date formats anyway. Making it a string (using as.character()) is a safer way to approach this.

The next step is the central focus of the algorithm, i.e., to pass each date to the GenerateCustomer() function. The GenerateCustomers() function creates a data frame using the rules described previously. More detail about the code itself will be described in the next section. The function returns a list containing the order number (oNum) and the data frame filled with orders based on the rules. This gets added to the master data frame that will be returned from GenerateOrders().